What is Sawtry Abbey?

The site of Sawtry Abbey is a field close to the northbound tracks of the East Coast mainline railway, and a mile east of the Great North Road. Nothing remains above ground though lumps and bumps help to define the elements of the large monastic settlement.

The Abbey of Saint Mary was founded in 1147 by Simon de Senlis, earl of Huntingdon and Northampton whose family descended from William the Conqueror. The abbey was the first house colonised by monks from the abbey of Warden near Bedford. The abbey took 91 years to construct, built of local stone from Barnack.

Consecrated in 1238, the abbey never achieved great prominence but it was visited by Kings, and in 1536 Catherine of Aragon’s body rested there when her funeral cortege broke its journey from Kimbolton Castle to Peterborough.

The abbey was dissolved in 1536 and the buildings were all subsequently demolished. It is documented that stone was still being taken from the site in the mid 19th century.

The remains take the form of a group of earth works contained within an area of pasture measuring approximately 400m by 300m. The foundation charter dictated that the abbey be isolated within a precinct defined by ditches, some of which remain visible around the edges of the field. The modern drain to the north is linked to the Monks’ Lode some 400m to the north east, so named as it is thought to have been constructed shortly after the abbey’s foundation, providing a navigable link to Whittlesey Mere and from there to the River Nene.

Excavations were undertaken by Inskip Ladds between 1907 and 1912. These defined the layout of the cruciform church, the cloisters, infirmary and guest house. The church was 60m in length with short transepts, and two rows of seven columns in the nave separating the aisles.

Aerial photographs also provide a glimpse of the site layout. 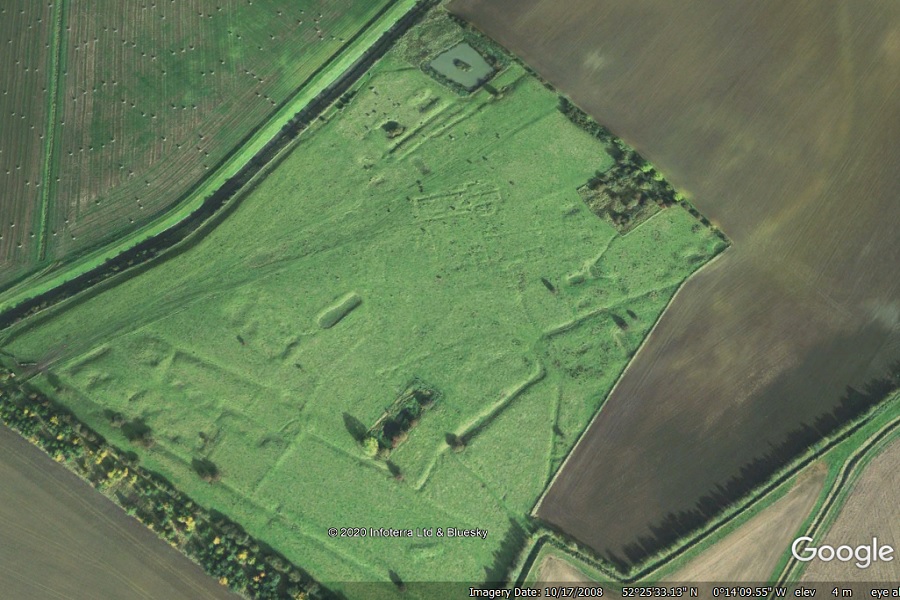 Since 2016 a project by the Sawtry History Society has been undertaking research to verify the information derived from Ladds. Resistivity survey results are indeed supportive of the plan drawn by Ladds.

Where did Sawtry Abbey Fit?

Founded as symbols of devotion by wealthy benefactors many religious houses were established throughout Europe in the 12th and 13th centuries. They often formed part of growing networks derived from a mother-house in France. Sawtry followed the Cistercian tradition which was originally developed at Citeaux Abbey near Dijon. The Cistercians had some 680 abbeys across Europe by the mid-13th century, of which about 100 were in Britain.

Each abbey derived income from a network of endowed estates. The Cistercian Order operated semi independently from local and even papal governance – owing allegiance only to God.

The abbey played an important community role, providing care to travellers and to the poor, sick and elderly of the neighbouhood.

Why is Sawtry Abbey Important?

Though it does not retain the splendour of other Cistercian monasteries such as Fountains or Riveaux it is significant as the only one in Huntingdonshire or Cambridgeshire. The history of the monastery is well documented and there remains scope to further explore the buildings themselves, and the relationship between the abbey and nearby settlements including the now lost village of Sawtry Judith.

The site was listed as a scheduled monument in 1954.

Be part of Peterborough Archaeology. Get your hands on the past.

Archaeology in & around Peterborough

Thank you to our sponsors and partners